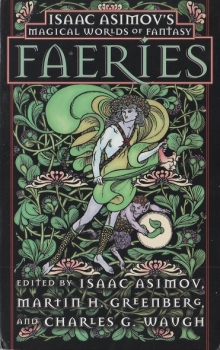 
Faeries- legends about them abound throughout the world. They are evil creatures conjured up to frighten children. Or they are glittering spirits, blessed with wisdom and magic beyond the understanding of mere mortals. They are the unseen, dwelling in subterranean depths, luscious green meadows, or realms caressed by the night's cool shadows.

Here, in eighteen captivating journeys into the enchanting Faery lands, you'll find all sorts of enchanted creatures: from the Faerie Queen and King to the mischievous Brownies, from those who prey on the gullibility of humans to those who have been tricked out of their treasures by ordinary men and women. You'll witness mortals being held for a few brief hours in the timeless kingdom-only to find themselves returned to a world no longer their own. But beware, lest the spell of Faerie touch you, too, and force you to wander forever through Isaac Asimov's magical fantasy world.